Forward Justice is proud to partner with the Poor People's Campaign: A National Call for Moral Revival and NAACP Legal Defense Fund for this evening of information and inspiration. Join us during tonight's event to hear Forward Justice Co-Directors Caitlin Swain and Daryl V. Atkinson speak about what's at stake during this important election and ways we can all ensure our voices and votes are heard. 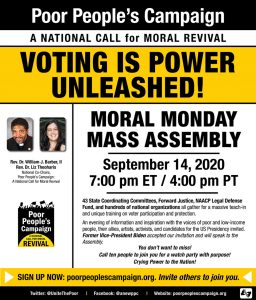 The 140 million poor and low-income people are the key to changing the political calculus in this country. That’s why the Poor People’s Campaign has launched a mass organizing project for the 100 days before the election: We Must Do M.O.R.E. (Mobilizing, Organizing, Registering, Educating People for a Movement that Votes).

Over the next three months, thousands of communities are coming together to build a new electorate of poor and low-income people of all races, religions, sexualities, and geographies to vote and organize for a moral agenda to transform our nation. We’re rolling out an expansive effort of base-building, voter registration and protection, town halls and forums, and nationally coordinated days of action.

Join the We Must Do M.O.R.E Campaign!
Become a Poll Monitor